Ahead of the United Nations Climate Action Summit, the exhibition brings climate change to the front page.

Columbia Journalism Review (CJR), the media industry’s leading press criticism publication, will unveil “Flood the News: Bringing the Climate Change Crisis to the Front Page,” an exhibit in collaboration with renowned visual artist, Joan Wong, at the Foley Gallery in New York City on Tuesday, September 17. The exhibition tackles the media’s coverage of climate change, an issue at the heart of CJR’s Covering Climate Change initiative.

“I hope the public, members of the press and climate activists take the opportunity to experience and see Joan’s striking artwork,” said Kyle Pope, Editor and Publisher of CJR. “The works bring to life some of the most devastating climate events in recent memory, from droughts to fires to record temperatures. The exhibit is an urgent call to action for more global coverage of climate change.”

Wong, a visual artist and illustrator whose focus is to create visible responses to narratives, explores the intersection of the climate change crisis and the lack of related news coverage in one central artwork. Wong’s piece will inform the exhibit’s other 35+ thought-provoking works featuring flooded, scorched and damaged front pages of global news organizations including The Australian, Dagens Nyheter, Folha de S. Paulo, and The New York Times. The technique gives the audience a stark warning of the rising risk from wildfires in California or floods along the world’s crowding coastlines. The tactile application on paper of different elements reveals the evidence of a warming world.

“Fostering experimentation at the intersection of climate science and the arts is a key goal of our new Initiative on Communication and Sustainability,” said Earth Institute Director Alex Halliday. The Initiative, launched in July, is directed by the longtime environmental journalist, Andrew Revkin.

The exhibition, created in partnership with TBWA\Chiat\Day New York, is open to the public on September 17 from 9:00 A.M. to 12 P.M. ET at the Foley Gallery, 59 Orchard, located on Manhattan’s Lower East Side.

The exhibition helps kick off CJR’s and The Nation’s Covering Climate Now initiative, through which more than 200 news organizations have committed to report on climate change, from September 16–20, in the lead-up to the United Nations Climate Action Summit. It is one of the most ambitious efforts to galvanize the press around a single reporting beat. The news outlets involved include major newspapers, magazines, television and radio broadcasters, and global news and photo agencies in North and South America, Europe, Africa, and Asia. 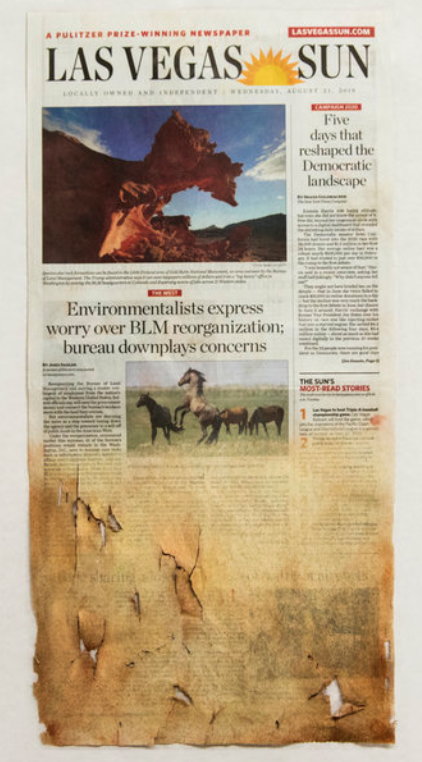